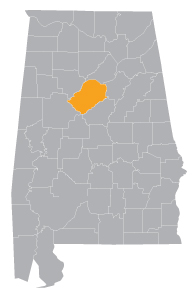 UB Community Development, LLC (UBCD), a community development partner of United Bank, has announced $1,000,000 in Community Facilities Lending funds designated to the Hueytown Fire Department for the purchase of a new fire engine.

Hueytown, population 16,305, is located 14 miles southwest of Birmingham, Alabama. The city has a rich history in the coal, steel and farming industries and has accessibility to a host of parks, hiking and cycling trails, historical sites and museums.

Chief Morris, Hueytown Fire Chief, came to United Bank struggling with meeting the demand of replacing his aging ten-year-old fire engines. “No fire department wants to rely on an aging fleet. It becomes a matter of public safety,” said Chief Morris. Older engines affect response time and the ability to extinguish fires, in addition to impacting the department’s insurance costs. It was time for a new engine.

Chief Morris began researching financing options to add a fire truck to his fleet. The chief had to overcome the challenge of keeping the purchase expense neutral. Because they had no variance in their budget to take on additional expenses, their monthly payments would need to stay the same.

“Unfortunately, when I began reaching out to larger, corporate financing sources, I was turned away. We couldn’t refinance the existing engines because they were too old. I was discouraged and thought I had hit a dead end. Through a referral, I was directed to United Bank.”

Through the Community Facilities Lending Program, UB Community Development and United Bank were able to structure a $1 million financing package that allowed the department to purchase a new fire engine as well as a new vehicle for the Battalion Chief. “We were actually able to buy more truck than originally thought,” Chief Morris said. “We upgraded to a larger cab for increased man occupancy and water carrying capacity, which is critical in rural settings.” He added that because the new payments were within the existing budget, there would still be funds available to update and replace aging safety gear for the department’s 33 firemen.

“I know what resources my team and I need to serve our community,” Chief Morris said. “Through the Community Facilities Lending Program, we were able to successfully get the resources needed for our community. The United Bank & UB Community Development team took care of things and briefed us every step of the way. It was a hometown personable experience. It was like dealing with friends.”

Communities rely on fire departments in times of crisis. Hueytown Fire Department now has the capabilities it needs to fight fire. Chief Morris concluded, “The Bank team opened up opportunities for smaller communities. This is the kind of relationship small individual cities need.”

Since 2016, the U.S. Department of Treasury, through its New Markets Tax Credit Program, has awarded United Bancorporation of Alabama (OTC: UBAB), the parent corporation of United Bank and UBCD, $120 million in New Markets Tax Credit allocations. UBA, and subsequently UBCD, are the only community development entities (CDE) headquartered in Alabama to receive a NMTC allocation from Treasury in the last decade. This success was made possible largely because of United Bank’s designation as a Community Development Financial Institution (CDFI) and the organization’s unwavering commitment to its CDFI mission to bring positive and sustainable economic and quality-of-life improvements to underserved communities, not only in its traditional banking footprint, but throughout the entire states of Alabama and Florida. 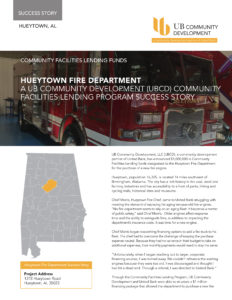